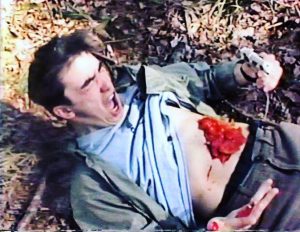 Since 2014, it has been R.J. Wilson’s goal to scare audiences “in 60 seconds or less”. This very website grew out of the frustrations of being a poor independent filmmaker, and — most importantly — out of a love of horror storytelling.

What you see on this website may scare you. It may disturb you, or it may make you chuckle. Hell, you may think every film on here is terrible and should be banished to the trash heap of the internet. Whatever you think of them, they’re made to be shared. So share them with your friends. Text them to your grandmother. Post them on your social media pages. Watch them on your phone – your little pocket movie theater – right before you go to bed on a stormy fall night. And most of all, think to yourself, “Hey. I could do that.”

R.J. Wilson is a filmmaker, editor, producer, and VHS hoarder based in Portland, Maine. He was born and raised in Auburn, Maine where he fell in love with filmmaking at the age of 13. He graduated with a BA in Media Writing from the University of Southern Maine and a Master’s degree in Film Production from Ohio University. Since 2015, he has acted as one of several producers for Damnationland: The Way Life Should Bleed, an annual and theatrical exhibition of original horror and thriller films by Maine filmmakers. He also plays guitar for Portland thrashpunk and cokecore band, Eyeball.